This is it, guys. I mean it this time. For real and realsies.

Today’s the last day you can get a free copy of Light as a Feather, Stiff as a Board for Kindle. It doesn’t matter what country you live in, as long as your country has Amazon. What are you waiting for? 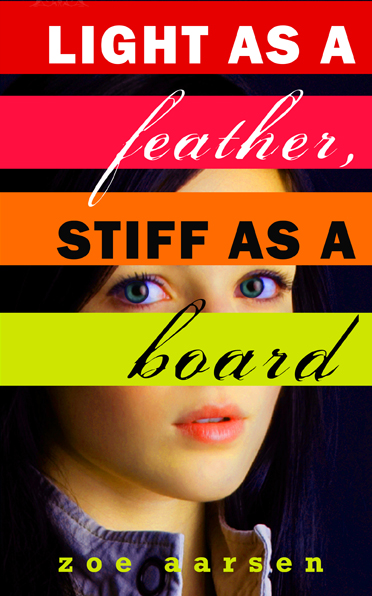 McKenna Brady thinks her junior year of high school is going to be the best ever when she’s welcomed into the elite group of popular girls at Weeping Willow High School led by blond, gorgeous Olivia Richmond. Prior to junior year, McKenna was known in her small town as the girl whose twin sister died in a tragic house fire, and she’s overjoyed at the prospect of redefining her identity. She has a date to the Homecoming dance with Olivia’s handsome older brother, and a good chance of being elected to student council. For the first time since McKenna’s parents divorced, things are looking up.
But everything changes the night of Olivia’s Sweet Sixteen sleepover birthday party. Violet, the shy, mysterious new girl in town, suggests that the girls play a scary game called Light as a Feather, Stiff as a Board, during which Violet makes up elaborate stories about the future ways in which beautiful Olivia, brassy Candace, and athletic Mischa will die. The game unsettles McKenna because she’s already escaped death once in her life, but she doesn’t want to ruin her friends’ fun. It’s only a game, she reminds herself.
But it doesn’t seem like a harmless game a week later when Olivia dies unexpectedly in a violent car crash, exactly as Violet predicted. And something begins haunting McKenna’s bedroom at night, leaving her clues that all seem to point to Violet. McKenna enlists the help of her cute next-door neighbor Trey in finding out exactly what kind of curse Violet has put on all of the popular girls in the junior class. As Violet rises to popularity and seemingly steps into the life Olivia left unfinished, McKenna and Trey know they only have a limited amount of time to bring an end to Violet’s game before more lives are lost.
Readers of this book can follow @VioletSimmonsWW on Twitter to continue the story, hear about what’s going on in Weeping Willow, and learn about contests.
For readers ages 13+.

i am an illustrator, a cat herder and an all-around troublemaker residing in los angeles. i write and read stories about scary things. View more posts